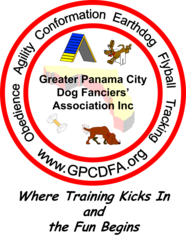 • To provide all dog enthusiasts, purebred and mixed breed, an environment in which good sportsmanship and
responsible dog ownership is promoted.

• To conduct Sanctioned Matches for Conformation, Obedience, Agility and Rally Obedience, under the rules of

• To conduct two AKC Sanctioned Conformation Show under the rules of the American Kennel Club yearly.

• To encourage and promote quality in the breeding of all purebred dogs and do all in our power to protect and advance               the interests of the breeds by encouraging good sportsmanship competition at all functions.

• To initiate and maintain competition, educational programs and promotional activities which will stimulate and

extend public interest and appreciation of the value of quality purebred dogs.

• To maintain at all times a warm atmosphere, firm friendship and highest sportsmanship

The Greater Panama City Dog Fanciers is also known as the Northwest Florida Foxhunters' Association (NWFFA).  The club's present location is the original location of the NWFFA. Our club house is the NWFFA's original hunting lodge.

The NWFFA was started in the 1940's as a fox hunting club.  Live animals were not used for the chase. Over the years as people moved in and out of the area, interest in fox hunting began to fade and NWFFA members began looking for other types of sports they could participate in.  Slowly, those members began to switch from hunting to competitive dog sports like obedience and conformation.  Eventually they formed the GPCDFA so that the members could participate and offer dog trials (shows) as well.  Today, the Northwest Florida Foxhunters' Association and the Greater Panama City Dog Fanciers is essentially one and the same club.  We keep the NWFFA name in honor of those great folks that had the vision to start this organization.

The GPCDFA was chartered by the AKC and incorporated in the state of Florida in 1972. The first competitive match was held in 1973 for local and surrounding area dogs and the club was approved for regular point shows by the AKC after successfully completing 3 of these matches. The club’s first AKC licensed regular point Conformation show was held in Panama City in 1975, with Lester Doty as the first Show Chairman. Dogs from 48 states and many foreign countries were entered to earn show points towards becoming an AKC champion of record.